Just added to your cart

Free shipping on orders over CAD $99

Basics of The Five Elements in Feng Shui

In Chinese, the words "feng" and "shui" literally mean “wind” and “water," respectively. This concept derived from an ancient poem that talks about human life being connected and flowing with the environment around it. In this blog post, we’ll explore the five elements in Feng Shui and how they affect our lives.

What is Feng Shui?

Feng shui is an ancient art and science that was developed over 3,000 years ago in China. The literal translation of “feng” means “wind” and “shui” means “water”. In Chinese culture, wind and water are both associated with good health. Thus, feng shui came to mean good fortune.

Feng shui is essentially the interaction of humans and their environments. It enables you to influence these interacting energies to achieve specific life improvements.

The Five Elements in Feng Shui

In Chinese philosophy, the Five Elements are the building blocks of everything in the Universe. The elements are Wood, Fire, Earth, Metal and Water.

Also known as the Five Transformations of Energy, each of the elements represent a different phase of energy and the Five Element Cycles show how these phases transform from one to the other.

One of the best ways to illustrate the energies are with the seasons:

How the Creative Cycle works can be illustrated below: To counter balance and keep harmony in the natural world, there is also the Controlling Cycle:

How the Five Elements Concept is Used in Feng Shui Jewelry

Each of us also has an element, which is determined based on which year we were born.

The energy of Wood is uprising, like sprouts rising up through the soil. The energy is strong and represents vitality. When it comes to personality types, the archetype of Wood is known as “The Pioneer” – a driving force and independence.

Recommended colors to wear for Wood types is green.

Because Water feeds Wood, you can also wear the Water colors (blue, black), and you should avoid Metal colors (gold, white) as Metal chops Wood.

The Fire Element is the most yang of all of the Five Elements. When it comes to personality types, the archetype of Fire is “The Wizard” – full of magic and passion. Fire types are enthusiastic, compassionate, confident, vibrant and love meeting new people.

Because Wood feeds Fire, you can also wear the Wood colors (green), and you should avoid Water colors (blue, black) as Water dowses Fire.

Earth is known as the ‘transitional’ element, which is placed at critical junctures of the 5 Elements Cycle. The Earth Element in personalities is known as the archetype of “The Peacemaker” – seeking harmony in the world.

Because Fire creates Earth, you can also wear the Fire colors (red, pink, orange, purple), and you should avoid Wood colors (green) as Wood breaks through Earth.

The Metal element is connected to the heavens, stars and sky. It is said to represent the spiritual path from awareness to enlightenment. The Metal Element in personalities is known as the archetype of “The Alchemist” – refined and noble.

Recommended colors to wear for Metal types are gold, white, and silver.

Because Earth produces Metal, you can also wear the Earth colors (brown, yellow), and you should avoid Fire colors (red, pink, purple) as Fire melts Metal.

Recommended colors to wear for Water types are blue, black, and white.

Because Metal condenses into Water, you can also wear the Metal colors (gold, white), and you should avoid Earth colors (brown, orange) as Earth dams up Water.

Depending on your element, you can strengthen your energy by wearing or adding the suggested colors into your everyday life and your surroundings.

Set your intentions whenever you wear your Feng Shui bracelet to manifest health, abundance, and to bring positive changes into your life.

LET CUSTOMERS SPEAK FOR US

Even though they were titled, Mother Daughter bracelets, I bought them for a dear friend who is like a sister to me. We both LOVE them. The quality and the colours are gorgeous! Thank you!

Great quality bracelet. Perfectly fit. Love the design. Actually got a pair for both me and my wife. 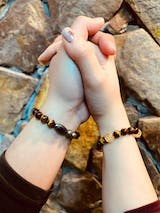 Gorgeous just like the picture. It radiates beautiful and positive energy. Fast shipping and lovely packaging! 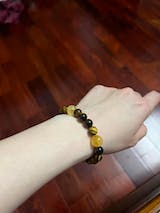 I really love my Love Magnet and Fertility bracelet! Beautiful, and full of love. 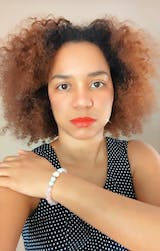 My bracelet arrived quick and in really cute packaging. My 7 Chakra Healing bracelet is exactly what I had hoped for! Thank you! 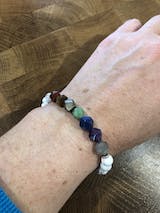 I bought 2 bracelets in the Feng Shui collection and I was impressed by the quality and craftsmanship of the products. The bracelets are well-crafted using high-quality gemstones and fit my wrist perfectly. Highly recommend! 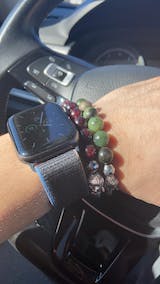 I received this bracelet as a birthday gift from a friend and I love it so much! I've been looking for a 7-chakra bracelet but haven't come across anything quite like this. The design is truly unique, and the quality of the stones is amazing! Fast shipping and lovely packaging. 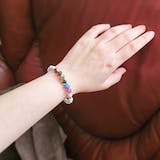 I bought 2 bracelets for myself and 2 for my wife and we both love them so much! The quality of the stones are amazing, very shiny and radiate beautiful energy. What I love the most about the bracelets is the designs, and the spiritual meaning behind each bracelet. I'll wear them everyday and hope they will bring us good fortune this year.

What I love about them is the different design of the stones and the great look that this bracelet adds . The stones are shiny with an amazing texture and colour. They clearly stand out . The packaging and delivery are impeccable as well. Goes on to show how much heart and love have been put into this by the creator of this amazing product. 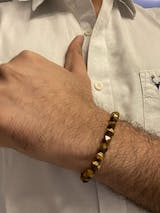